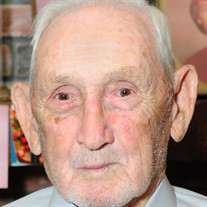 Iowa – Alex Pierre Guidry, 95, passed away at 10:05 p.m., September 13, 2015 in Lafayette General. A Mass of Christian burial will be in St. Raphael Catholic Church of Iowa Thursday, September 17, 2015 at 1 p.m. with Father Roland Vaughn officiating. Burial will follow in Lacassine Cemetery under the direction of Johnson & Brown Funeral Home. Visitation is Wednesday in Johnson & Brown Funeral Home from 11 a.m. – 9 p.m. with a Celebration of Life 6:00 p.m. followed by a rosary at 6:30 p.m. Visitation will resume Thursday in the funeral home from 9 a.m. until 12:30 p.m. Mr. Guidry was born in Carencro on March 3, 1920 to the late Treville and Celestine Lormand Guidry. He attended Welsh High and served in the 83rd Field Artillery Battalion during WWII. He was the charter President and founding member of the Lacassine Optimist Club. He and his late wife, Edith “Ta Toot”” were chaperones of the Jr. Newman Club of Lacassine. Mr. Guidry was a self-employed carpenter and enjoyed gardening and watching wrestling in his spare time. He is survived by his children, Larry Guidry and wife, Linda of Lacassine, Gerald Guidry and wife, Jovita of Iowa, Ricky Guidry and wife, Tricia of Lake Charles, Paul Lynn Guidry and wife, Celena of Lacassine and Ella Marie Thayer and husband, Herb of Lafayette; brother, Danis Guidry and wife, Eunice of Lake Charles; 15 grandchildren and 23 great-grandchildren. He is preceded in death by his parents; spouse, Edith Marie LaBauve Guidry; siblings, Moise, Dewey, Aristia, Treville, Analise, Bertha and Azelima. The family would like to thank Mack & Linda Mahaffey and nephew, Champ Sonnier for looking out for their father.

The family of Alex Pierre Guidry created this Life Tributes page to make it easy to share your memories.

Send flowers to the Guidry family.