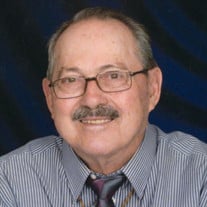 Alvin Adam Richard, born in Lake Arthur on September 7, 1938, passed away in a local care facility on Monday, May 10, 2021, at the age of 82. Alvin was the first child of the late Raymond and Dorothy Belaire Richard. He was a 1957 graduate of Lake Arthur High School where he was involved in various extracurricular activities teaching him to be of service to others. While in high school, Alvin fell in love with the Miss Wanda Louise Bertrand taking her hand in marriage and having their wedding blessed on June 20, 1959. In the years that followed this union was gifted four children. Side by side, Alvin and Wanda were involved in church, community and in the school activities of their children becoming instrumental in various roles especially the forming of the booster club for The Lake Arthur High School Pride and Spirt Band. Alvin, being a self-taught artist and draftsman, he designed and painted signs and murals as well as drew house plans. He helped make Lake Arthur beautiful by commissioning paintings to welcome travelers to his beloved city. Alvin also served his community as Lake Arthur Alderman for 4 years and was active with the fire department for 20 years serving as assistant fire chief a number of those years. Alvin was given an advancement opportunity in his career when his employer, Mobil Oil transferred he and his family to Lafayette. Soon after the move he was involved in the new community being elected to the parish council at Holy Cross Catholic Church. In the years that followed, he was transferred to Grapevine, Texas, where both he and Wanda continued their involvement in church activities serving as lay ministers at mass and nursing homes. Alvin retired from Mobil Oil in 1993 and the Richards soon returned home to Lake Arthur where they continued their life of service to Our Lady of the Lake Catholic Church where Alvin served as a Lector; Eucharistic Minister and sang in the church choir. Alvin was a 3rd & 4th degree knight with the Lake Arthur Knights of Columbus. Alvin, being an innovator and hard worker, joined others in the forming of the Jeff Davis Water Company where he worked a number of years. Most recently Alvin and Wanda lived in Iowa, LA to be near three of their children. Once settled in Iowa, they joined The Council on Aging Senior Group enjoying numerous outings and festivities and served as King and Queen of Mardi Gras in 2020. Over the years, Alvin encountered the lives of many a person creating lifelong friendships and memories. He always had a smile and a kind word never meeting a stranger. No matter if Alvin was close to home or traveling with family, friends, a camping club, or a CB radio group, he was often introduced as “The BSer”, a title he earned from friends at the Lake Arthur NAPA store. He enjoyed a facet of hobbies including cooking and making wine and was no stranger to the dance floor with his smooth moves. He and Wanda could “cut a rug” and most recently danced on their anniversary at their granddaughter’s wedding reception in 2020. Alvin was a provider and devoted husband of 62 years to Wanda Bertrand Richard. He was the father of Glenn Richard (Dewanna) of Moss Bluff; LaDonna Richard Guidry (Patrick) of Iowa; Colin Richard (Dawn) of Scott; Maura Richard Fontenot (Tracy) of Lake Charles; brother of Harold Richard (Shirley) of Lake Arthur and Lance Richard (Joann) of Jennings; grandfather of Jimmy “JD” Craft (Krystal); Lacie Legros (Nicole); Kali Kosarek (Jacque); Paige Morgan (David); Kayla Guidry; Tiffany Caudill (Tory); Christina Junker (Trey); Courtney Richard (Blair); Miranda Holbrooks (Cayd Granger); Lyndsey Savant (Scott); Baylee Fontenot; great grandfather of Hunter; Remington; Charlotte Dawn; Drew; Liam; Krissy; Layne; Taytum; Austyn; Griffyn and soon to be born McKenzie Rose; Isla Rose; Remi. Alvin’s life will be remembered with a Memorial Mass at 1 p.m. on Saturday, May 22, 2021 in Our Lady of the Lake Catholic Church in Lake Arthur with Monsignor Charles Dubois, and Rev. Jay Alexius as Celebrants. Inurnment will follow in St. Anthony Catholic Cemetery in Lake Arthur under direction of Johnson and Brown Funeral Home of Iowa. A gathering of friends and family to share memories of Alvin will be held in the Oustalet Center of Our Lady of the Lake Catholic Church on Saturday, May 22, 2021 from 11 a.m. until the time of the service at 1 p.m.

Alvin Adam Richard, born in Lake Arthur on September 7, 1938, passed away in a local care facility on Monday, May 10, 2021, at the age of 82. Alvin was the first child of the late Raymond and Dorothy Belaire Richard. He was a 1957 graduate... View Obituary & Service Information

The family of Alvin Adam Richard created this Life Tributes page to make it easy to share your memories.

Send flowers to the Richard family.