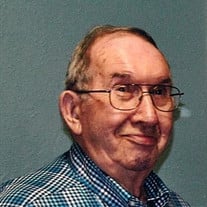 Iowa-Amos Lee Johnson, 88, earned his “wings” on Friday, January 30, 2015. Amos was born in Branch, LA on December 28, 1926. He graduated as valedictorian of Fenton High and the recipient of the American Legion Award and attended SLI (now USL) in Lafayette. Amos served in the U. S. Army from 1945 to 1946 in Germany. He married Ruth Bourgeois on November 2, 1947 and together they raised 5 children; 4 grandchildren and 6 great-grandchildren. Amos retired from the Port of Lake Charles after 34 years. He was a member of St. Raphael Catholic Church, where he was involved in the Altar Society, Reader and a Eucharistic Minister and a retired member of the Memorial Hospital Auxillary. He was the recipient of the Lake Charles Diocesan Companion of Honor. Amos was involved not only in his church, but in his community and enjoyed lending a helping hand. He volunteered at the nursing home in Welsh for many years. He enjoyed baking (we will miss his pear cakes!), cross word puzzles, playing bingo & pokeno with friends. A Mass of Christian burial will be Monday, February 2, 2015 at 1 p.m. in St. Raphael Catholic Church with Father Marcus Johnson officiating. Burial will follow in Lacassine Cemetery under the direction of Johnson & Brown Funeral Home. Visitation is today, Sunday from 2 p.m. until 8 p.m. with a rosary at 6 p.m. in the funeral home and will continue Monday from 8 a.m. until 12:30 p.m. in the funeral home. Survivors are his wife of 67 years, Ruth B. Johnson of Iowa; sons, Ronald Johnson of Lake Charles, Ricky Johnson of Woodville, Texas, daughters, Karen Johnson of Scott, and Melanie Johnson Manuel (Boyd) of Lake Charles; sisters, Edith LeJeune of Pine Island and Jeanette Manuel of Sulphur; grandchildren, Lyn Johnson Hebert (Dan), Kari Johnson Cook (Russell), Kyle and Leann Manuel; great-grandchildren, Aleks, Lexi, Alyssa, Traive, Camden and Kova; in-laws, Charles & Barbara Bourgeois, Christine Bourgeois, Yvonne Bourgeois, Kenneth & Bert Bourgeois and Nola Jane Broussard; numerous nieces & nephews. He is preceded in death by his parents, Andrew Jackson Johnson and Alice Prather Johnson; daughter, Diane Johnson; 5 brothers and 2 sisters.

Iowa-Amos Lee Johnson, 88, earned his &#8220;wings&#8221; on Friday, January 30, 2015. Amos was born in Branch, LA on December 28, 1926. He graduated as valedictorian of Fenton High and the recipient of the American Legion Award and attended... View Obituary & Service Information

The family of Amos Lee Johnson created this Life Tributes page to make it easy to share your memories.

Send flowers to the Johnson family.