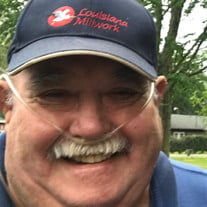 Iowa – With heavy hearts, the family of Anyer Lee “Tiny” Miller, announce his death on Saturday, March 10, 2018 in his home. Born March 29, 1942, Tiny was the fourth child of eight to Aladin and Maybelle D. Miller. He is preceded in death by his parents; wife, Velma Landry Miller; and two sons, John and Tim Ange. “Tiny” is survived by two loving daughters, Josephine Barkley and spouse, Stephen, and Connie Miller-Lew and spouse, Tim, all of Tucson, Arizona; son, Barry Miller and spouse, Holly, of Welsh; eight grandchildren and two great-grandchildren. Tiny is also survived by six brothers, Ralph Miller of Duson, A. J. Miller (Lois) of Kilgore, TX, Luther Miller (Mary Nell) of Fenton, Jerry Wayne Miller (Sheila), Malcolm Miller (JoAnn), both of Dry Creek, Johnny Miller (Linda) of Jennings; sister, Katherine M. Corbello (Fiancé, Harold Langley) of Fenton; numerous nieces and nephews who all hold each a special memory of their Uncle Tiny. A special mention of his very best friend and lucky enough to be a relative, Victor Miller. Also, his neighbor, Melissa Murphy, whom he thought of as a daughter. Thank you, Vic and Melissa. Tiny enjoyed working with his honey bees, making sausage and tending to his garden. He served in the United States Army. A Mass of Christian burial will be in St. Raphael Catholic Church of Iowa on Wednesday, March 14, 2018 at 2 p.m. with Father Dismas Mauk as celebrant. Burial will follow in Hebert Cemetery. Visitation is Tuesday in Johnson & Brown Funeral Home – Iowa, from 5 p.m. – 9 p.m., with a rosary recited at 7:00 p.m. and will resume Wednesday in the funeral home from 9 a.m. until 1:30 p.m.

The family of Anyer L. "Tiny" Miller created this Life Tributes page to make it easy to share your memories.