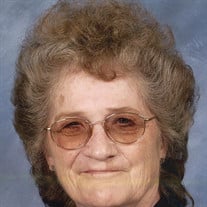 Lacassine–Funeral services celebrating the life of Audrey Marie LeBlanc, 78, will be held at 10 a.m., Wednesday, August 12, 2015 in St. John the Evangelist Catholic Church with Father Roland Vaughn officiating. Burial will follow in Lacassine Cemetery under the direction of Johnson & Brown Funeral Home. Visitation is Tuesday in the funeral home from 4 p.m. until 9 p.m. with a rosary at 6:30 p.m. and will resume Wednesday from 8 a.m. until 9:30 a.m. in the funeral home. Mrs. LeBlanc passed from this life Monday, August 10, 2015 in the comfort of her home. She was born in Lake Arthur, LA., and lived most of her life in Lacassine. Mrs. LeBlanc was a member of St. John the Evangelist and St. Raphael Catholic and was a past member of the Catholic Daughters and Altar Society. She enjoyed canning, baking and sewing. She was preceded in death by her parents, John and Hazel Marie Quibodeaux LeBlanc; husband, Donald LeBlanc, son, Glen LeBlanc, brothers, Julius, Jimmy and Harold LeBlanc. Left to cherish her memory include her children, Danny J. Migues (Dinah) of Fenton, Michael S. LeBlanc (Debra) of Lacassine, Charles R. LeBlanc (Jeff Ciolino) of Houston, Donald Ray LeBlanc of Lake Charles and Sharon A. Louviere of Lacassine; siblings, Bertha R. Crochet (Elton Pierre) of Hathaway, Velma L. Harris of DeRidder, Carolyn LeBlanc (Al) of Roanoke and Connie S. Menard (Wayne) of Roanoke; twelve grandchildren.

The family of Audrey Marie LeBlanc created this Life Tributes page to make it easy to share your memories.

Send flowers to the LeBlanc family.