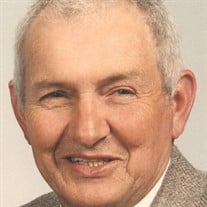 Iowa – Bemiss Hopkins Cunningham, 88, passed away at 12:45 a.m. May 10, 2015 at Harbor Hospice in Lake Charles. Bemiss was born on March 28, 1927 in Beaumont, TX to Samuel P. Cunningham, II and Marion Josephine Cunningham. He has resided in Chloe and Iowa, LA for much of his life. Bemiss attended high school in Tucson, Arizona, and then enlisted in the U. S. Army during WWII. He was stationed in Japan after peace was declared. He considered becoming a Forest Ranger and attended two years of college at Colorado A & M. Bemiss moved to Lake Charles and worked at Citgo for 44 years as an operator. On January 1, 1950 Bemiss married Gloria Gladys Jenson. He became a devoted husband, father, grand-father and great-grandfather and beloved friend to many. Gloria and Bemiss brought six beautiful children into the world. Bemiss and Gloria lived on English Bayou for 20 years, and then moved to Iowa. Bemiss was a deacon for Lake Charles Baptist Church for several years, and then moved to become a member of Iowa First Baptist Church. He was a Boy Scout leader since 1968. Bemiss was very dedicated to the Boy Scouts and made many camping trips to Camp Edgewood with his troop. Bemiss was very active in the Iowa AARP #4922 and served as Treasurer in 1993 -1994 and President in 1997-1998. He received the AARP National Service award in 2000 and certificate of appreciation in 1998; a certificate of appreciation from the Town of Iowa in 2008 and was a representative of TRIAD for many years. Bemiss was crowned Rabbit Festival King in 2011 and was involved in civic affairs and always loved helping others for many years. He was a self-taught veterinarian, always taking care of all types of animals and one of his highlights in his life was meeting the author of All Creatures Great and Small, James Herriot. He is survived by his son, Martin Cunningham of Iowa; daughters, Cathy Cunningham of Vinton, Sheri Collins of Lake Charles and Connie LeBleu of Iowa; siblings, Samuel P. Cunningham, III (Donna), James Harrison and Mary Lou Williams; grandchildren, Bemiss Craig Windham, Charles Francis Stenbeck (Abigail), Jessica Stenbeck, Scott LeBleu (Beth), Jericka LeBleu and Jaleigh Gloria Roque; great-grandchildren, Rosa Orellana, Carlos Stenbeck, Nicholas Stenbeck and Kopelan Scott LeBleu and his beloved dog, Shushu. Preceding him in death are his wife, Gloria Cunningham; son, Alden Bemiss Cunningham; daughter, Nancie Leigh Cunningham; parents; siblings, Billy Harrison and Jo Helen Vincent. Funeral services will be in Johnson & Brown Funeral Home on Wednesday, May 13, 2015 at 10 a.m. with Rev. Brandon Oliver officiating. Burial will follow in LeBleu Cemetery in LeBleu. Visitation is Tuesday from 4 p.m. until 9 p.m. in the funeral home and will resume Wednesday from 8 a.m. until the time of service. In lieu of flowers, donations may be made to the Boy Scouts of America. The family would like to thank Dr. Jarmon Comeaux for his compassion and care of their father.

The family of Bemiss Hopkins Cunningham created this Life Tributes page to make it easy to share your memories.

Send flowers to the Cunningham family.