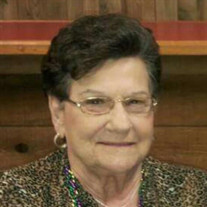 Betty Jane Miller, born Richard, 80, entered into the arms of her Lord & Savior on January 9, 2016 at Harbor Hospice is Lake Charles surrounded by her most cherished family. Betty was born October 22, 1935 in Manchester, Louisiana, to Luma Richard and Glady Shuff Richard and later moved to Lake Charles and resided there until death. She attended LaGrange High School. She married Laten T. Miller in 1953 and they had four children. Betty was a devoted housewife and mother and was the best at what she did. She was always the strong person and caregiver in her family since a very young age. She spent the last 5 years caring for her husband who was diagnosed with Alzheimer’s in 2000 and entered into the later stages in 2010 after an illness. They were residents at The Gardens from May 2014 until October, 2015. She cared for him until the day she was admitted to the hospital in December 2015. In her younger years, Betty was the secretary/bookkeeper for their business, Miller’s Air Conditioning & Heating in the 1960’s & 1970’s. She later worked for several years at Smokey Joe’s Bar-B-Que where she made many new friends. She loved playing cards with her friends and also quilted for a while. She is survived by the Love of her Life and husband, Laten T. Miller. They would have celebrated their 63rd anniversary on Valentine’s Day. She is also survived by her children, Lynn Miller and wife Elizabeth, David Miller and wife Janet, Pam Miller Hymel and her husband Wendell, Sheila Miller Rather and her husband Gerald, her sister-in-law/half-sister, Sybil Richard, Sister-in-law, Beverly Liprie and Broher-in-law, Harry Miller. She had 9 grandchildren, Jennifer Fontenot, Joshua Miller, Jerred Hymel, Marlaena Miller, Monica Miller, Jamie Hymel Wolfe, Michael Rather, Tyler Rather and Zachary Miller all of Lake Charles and Iowa. She had 13 great grandchildren and 2 great-great grandchildren and many nieces and nephews who were VERY special to her. Betty is preceded in death by her father, mother, brother, Paul Howard (Ben) Richard and many uncles and an aunt who played a big part in her life.

Betty Jane Miller, born Richard, 80, entered into the arms of her Lord & Savior on January 9, 2016 at Harbor Hospice is Lake Charles surrounded by her most cherished family. Betty was born October 22, 1935 in Manchester, Louisiana, to Luma... View Obituary & Service Information

The family of Betty Jane Miller created this Life Tributes page to make it easy to share your memories.

Betty Jane Miller, born Richard, 80, entered into the arms of...