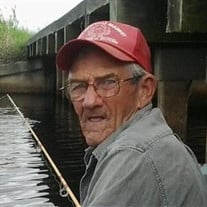 Hayes – Bootsie Aucoin, 77, passed away Sunday, October 4, 2015 in a Houston, Texas hospital surrounded by his family. Funeral services will be Thursday, October 8, 2015 at 10 a.m. in Johnson & Brown Funeral Home. Cremation will follow the service under the direction of Johnson & Brown Funeral Home. Visitation is Wednesday in the funeral home from 4 p.m. until 9 p.m. and will resume Thursday from 8 a.m. until the time of service at 10 a.m. Bootsie was born March 29, 1938 to the late John and Ivy O’Blanc Aucoin in Hayes. He was a carpenter and loved woodworking, gardening and fishing at the Lorrain Bridge. He is survived by his son, Jerry “Bubba” Aucoin (Pebbles) of Hayes, LA; daughter, Beverly Rushing (Wayne) of Hayes; brothers, Claude Aucoin (Bernice) of Welsh, LA and Daniel Aucoin of Hayes, LA; grandchildren, Joseph W. Rushing, Jamie DeWitt, Amanda Spainhour and Nicole Aucoin; great-grandchildren, Alexis DeWitt, Haley Rushing, Zoe Hamm, Evan Jones, Taylor Spainhour, Brooke Jones and Jacob Aucoin. Bootsie is also survived by his nieces and nephews. He is preceded in death by his wife, Joyce Groves; parents; and brother, Jimmy Lee Aucoin. In lieu of flowers, the family requests that donations be made to help with expenses.

The family of Bootsie John Aucoin created this Life Tributes page to make it easy to share your memories.

Send flowers to the Aucoin family.