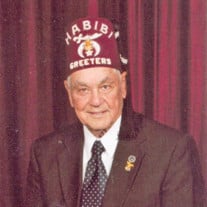 Lake Charles – Calvin W. Fontenot, born July 17, 1927 in Kinder, son of the late Mitchel and June (Cranford) Fontenot, passed away Thursday, May 2, 2019, in a local hospital at the age of 91. Calvin was raised in Edna and worked for King’s Farm in Kinder. He enlisted in the U. S. Army in December of 1945 and served in the artillery division during WWII. He was a member of the Lake Charles Bible Church. Also, he was a member of the Habibi Temple, Blue Lodge #449 and Pine Shadow Golf Club. Calvin was employed by Chicago Bridge & Iron, Lone Star Cement Plant and Boiler Maker Union, Local #79. Calvin is survived by his children, Belinda House (Ed) of Lake Charles; Walter D. Fontenot (Anna) of Longville; Trisha Theriot (Roger) of Iowa; grandchildren, Fred Wiley (Tricia), Richelle Wiley, Justin Fontenot (Jessica), Heather Fontenot, Shawna Theriot Chapman (Michael) and Roger Paul Theriot (Dana), Jr.; 11 great-grandchildren and 4 great-great grandchildren. He is preceded in death by his wife, Elfriede “Oma” Fontenot. Funeral services will be in Johnson & Brown Funeral Home of Iowa on Monday, May 6, 2019 at 11 a.m. with Pastor Phil Carpenter officiating. Burial will follow in Prien Memorial Park with military honors. Visitation is Sunday from 5 p.m. – 8 p.m., with a Masonic service at 6:30 p.m. and will resume Monday from 8 a.m. until the time of service. The family would like to thank Brighton Bridge Hospice, Nurse Taylor, CNA, Veronica and the rest of the staff.

The family of Calvin W. Fontenot created this Life Tributes page to make it easy to share your memories.