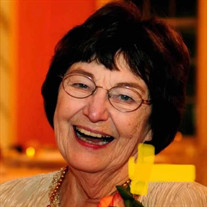 Bell City &#8211; Carol Ann Nunez was born January 25, 1937, to the parents of John B. and Alice Hockey. Carol Ann passed away in her home on June 22, 2022, at the age of 85 years, surrounded by her loving family. Carol Ann was the matriarch... View Obituary & Service Information

The family of Carol Ann (Hockey) Nunez created this Life Tributes page to make it easy to share your memories.