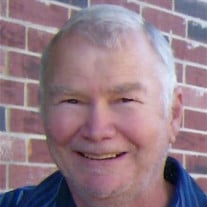 Hayes - Dwight Lee LaCombe, 63, passed away in a local hospital Monday, September 7, 2015. Dwight was born in Jennings to the late Leroy and Anna Grace (Sonnier) LaCombe on July 25, 1952. He married Pamela “Pam” Trahan on November 29, 1975 and worked for many years at Wilson Supply. Dwight enjoyed fishing, camping, LSU on Saturday and the Saints on Sunday. He also loved spending time with his grandsons. Survivors include his wife of nearly 40 years, Pam LaCombe of Hayes; son, Chris LaCombe and wife, Mary of Lake Charles; sisters, Bonita Holland and husband, Douglas of Hayes, Elaine LaCombe of Pattison, Texas and Sue Guidry and husband, Leroy of Hayes; 2 grandsons, Paul and James LaCombe; godchildren, Chante` Clark, Kristy Mouton and Jacob LaCombe and numerous nieces and nephews. He is preceded in death by his parents and infant brother, Winfred LaCombe. Funeral services are Thursday, September 10, 2015 at 11 a.m. in Johnson & Brown Funeral Home. Burial will follow in Hayes Cemetery under the direction of Johnson & Brown Funeral Home. Visitation is Wednesday from 4 p.m. – 9 p.m. in the funeral home and will resume Thursday from 8 a.m. until the time of service. In lieu of flowers, donations may be made to help the family with expenses.

The family of Dwight Lee LaCombe created this Life Tributes page to make it easy to share your memories.

Hayes - Dwight Lee LaCombe, 63, passed away in a local hospital...

Send flowers to the LaCombe family.