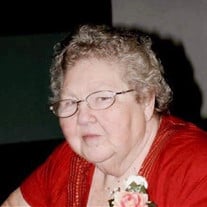 Hayes – Freda C. Myers, 72, passed away in a local hospital on Sunday, March 5, 2017. Born in Hayes on November 22, 1944 to the late Avia and Idelle (Benoit) Courville, Freda was a graduate of Hayes High and had been employed as a CNA for many years. She was a member of St. John the Vianney Catholic Church in Bell City; where she served on the Ladies Altar Society and Catholic Daughters. Freda was also a member of the CFMA. She enjoyed crafts, cooking and spending time with her family. Preceding her in death are her spouse, Fred Myers, Sr.; parents; siblings, Norman, Brenda and Patsy Courville. Left to cherish her memory are her children, Ernest Myers, Anna Nunez (Dwayne), Fred Myers, Jr., Robin Richard (Reggie), Cliff Myers (Monica), Shirley Streams, Dieago Myers and Sarrita Fontenot (Chris); siblings, Barbara Leger (Isaac), Junior Courville, Bonnie Bourgeois (Joe) and Larry Courville (Melinda); 16 grandchildren and numerous great-grandchildren. Visitation is Tuesday, March 7, 2017 in Johnson & Brown Funeral Home of Iowa from 5 p.m.– 9 p.m., with a rosary at 6:30 p.m. Visitation will resume Wednesday in the funeral home from 8 a.m. until the time of service at 11 a.m. Funeral services are Wednesday in the funeral home at 11 a.m., with Father Roland Vaughn officiating. Burial will follow in Lacassine Cemetery under the direction of Johnson & Brown Funeral Home.

The family of Freda Courville Myers created this Life Tributes page to make it easy to share your memories.

Send flowers to the Myers family.