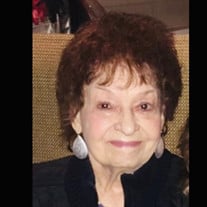 Gloria Bridges Parker, born Cole, age 91 of Gillis, Louisiana gained her heavenly wings on October 22, 2018 with her loved ones by her side sadly closing a chapter in the family's history as she was the last of her generation. Gloria was born on February 22, 1927 to David Cole and Florence Ball Cole. She was educated at Gillis High School and was elated when Gillis Elementary was built on the original school site in 1983, returning a school back to her community. Gloria was an avid reader, game show watcher, pro shopper and adventurous traveler. Planning great meals and having the entire family gather made her the happiest. Those left to cherish Gloria's memory are her children, Larry Bridges (Peggy) of Gillis, Lynn Bridges (Sherry) of Lake Charles, Bob Bridges (Judy) of Pearland, Texas, and Donna Bridges Little (Randy) of Gillis; grandchildren, Pamela Phillips, Larry Bridges Jr., both of Houston, Texas, Shelli Barrett (Michael), Kayci Crookshank (Joshua) all of Lake Charles, Scott Bridges, Chad Bridges, both of Pearland, Texas, Kristi Lawler (Kent) of Friendswood, Texas and Kyla Little of Gillis; great grandchildren, Kyle Phillips, Conner Phillips, Kailey and Jake Barrett, Ella, Evie and Hudson Crookshank, Ireland Syphrett, Kade and Paxton Lawler and as well as nieces and nephews that she loved as her own. Proceeding Gloria in death are her parents; eight siblings; her first husband and father of her children, Frank B. Bridges; second husband, Malcolm A. Parker and grandson, Ryan G. Little. Funeral services will be held on Friday, October 26, 2018 at 11 a.m. in Johnson & Brown Funeral Home of Iowa with Pastor Tony Bourque officiating. Burial will follow in Creel Cemetery. Visitation is Thursday from 5 p.m. until 8 p.m. and will resume Friday from 8 a.m. until the time of service at 11 a.m. in the funeral home. Pallbearers assisting in her service are Chad Bridges, Larry Bridges Jr., Scott Bridges, Randy Cole, Joshua Crookshank and Kent Lawler. “For the LORD is good; his mercy is everlasting; and his truth endureth to all generations.” Psalms 100:5

Gloria Bridges Parker, born Cole, age 91 of Gillis, Louisiana gained her heavenly wings on October 22, 2018 with her loved ones by her side sadly closing a chapter in the family's history as she was the last of her generation. Gloria was born... View Obituary & Service Information

The family of Gloria Bridges Parker created this Life Tributes page to make it easy to share your memories.

Send flowers to the Parker family.