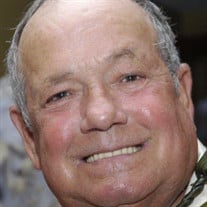 Crowley, LA – Harlan Joseph “Butch” Guillory, passed away on Monday, June 14, 2021, at Southwind Nursing Home. Butch was born January 17, 1946, in Iowa, LA. He was the son of the late Lesby and Octavia (Granger) Guillory and a graduate of Westlake High School. Butch served in the Army National Guard in Fort Polk where he was a Rifle M-1 Expert. After being honorably discharged he worked as a carpenter with unions between Texas and Louisiana. One of his proudest accomplishments was building many of the high-rise buildings in Houston. He then worked at USL as a carpenter for many years. He loved creating and building many pieces of furniture for family and friends. Butch was a member of the Twelfth Knight Revelers of Lake Charles where his love of Mardi Gras and dancing will always be remembered. He loved to volunteer his time and cooking for their events. He was also, a member of the American Legion Post 370 of Westlake and Post 1 of Lake Charles. After retirement he worked as a crossing guard in Moss Bluff where he made sure all the children walked into school with a smile. He will be remembered for the love of his grandchildren, Mardi Gras, Cajun dancing, and cooking. He is survived by his son, John Guillory, and wife Diana Guidry; daughter, Paula Norsworthy; brother, Chris Guillory and wife Rachel; sister, Katherine Lopez and husband Pete; his aunt, Fern Godeaux and husband Hubert; grandchildren, Maegan, Nicholas, Michael and Tyler and his beloved great-granddaughter Averie LaBiche and a host of nieces and nephews. The family would like to express their gratitude to his life partner of over 20 years, Linda Carlile. He is preceded in death by his parents; sister, Jeanette Bertrand; brother, Benny Guillory. The family would also like to express their gratitude to the staff at Southwind Nursing Home and the staff at Acadia General Hospital ICU and 3rd floor nursing staff. Memorial Services will be held in Johnson and Brown Funeral Home of Iowa on Tuesday, June 29, 2021 at 3:30 p.m. Gathering of family and friends will begin at 2 p.m. and continue until the time of service in the funeral home. Cremation has been entrusted to Johnson & Brown Funeral Home of Iowa.

The family of Harlan Joseph "Butch" Guillory created this Life Tributes page to make it easy to share your memories.

Send flowers to the Guillory family.