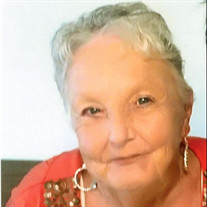 Iowa &#8211; Helen Margret Givens, born on June 24, 1942 in Shreveport, La., as the daughter of the late Pernie Hinson and Martha Louise (Brown), passed away on Thursday, August 5, 2021, at the age of 79. Helen enjoyed spending time with her... View Obituary & Service Information

The family of Helen Margret Givens created this Life Tributes page to make it easy to share your memories.

Send flowers to the Givens family.