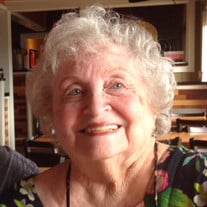 On December 12, 2017, Helen Jean Stoddard passed from this life to the next. There was a great celebration in heaven where angels received her. After suffering a fall in her home, Helen remained in a peaceful coma for 4 days while her family was faithfully by her side throughout this difficult time. Helen was born in Chicago, IL on February 19, 1934. She attended W.B. Ray High School’s first graduating class in 1950 in Corpus Christi, Texas. Helen met Richard Hewitt, who was stationed at the CC Naval Base. They made Corpus Christi their home until Richard’s service was up. They then moved to his home state of Louisiana. After settling in Sulphur, LA, Helen & Richard raised their three children in a traditional household. Helen ran an efficient home and focused on her family's needs. Helen later met & married Jim Stoddard on Valentine’s Day 1981. Jim was a very devoted husband to Helen up to her last minute of life and for that, we thank him. Helen was an exceptional cook. Her delicious food was always made with loving hands. She had an extraordinary flair for great conversation. Her family will remember her as a gentle, devoted, courageous lady who led her life as an example to all. Helen is survived by her husband of nearly 37 years Jim, her three children, Judy Lawrence, Ric Hewitt & Edie Benoit. She also leaves behind three grandchildren, Ryan Lawrence (Misti), Matthew Lawrence, Heather Kenrog (Aquintas); four great grandchildren, Madison, Landon, Justice, and Paris and two great- great children, Mason and Ellie. In addition, her bereaved family includes her brother, Bob Black of San Antonio, Texas and sisters, Connie Hughes of Austin Texas, Dorothy Deaver of Corpus Christi, Texas, Berta LeMaire of Charlotte, NC and Barbara Ferreira of Jasper GA. She is preceded in death by her mother, Jean Winslow Black; father, Robert Beauregard Black; brother, Gordon Black, and her sister Susan Funk. A Celebration of Life will be held at Tower Oaks, 222 Louie Street, Lake Charles, Friday, December 22, 2017 at 1 p.m., with a gathering of friends beginning at 12 p.m. at Tower Oaks. Cremation has been entrusted to Johnson & Brown Funeral Home ~ Iowa.

On December 12, 2017, Helen Jean Stoddard passed from this life to the next. There was a great celebration in heaven where angels received her. After suffering a fall in her home, Helen remained in a peaceful coma for 4 days while her family... View Obituary & Service Information

The family of Helen Jean Black Hewitt Stoddard created this Life Tributes page to make it easy to share your memories.

Send flowers to the Stoddard family.