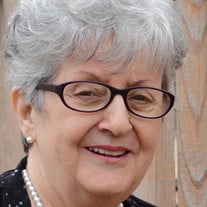 Iowa – Henrietta Lane David, born July 1, 1943 in Crowley, daughter of the late Henry Lee and Elaine (Istre) Chapman, passed away after a courageous battle with Alzheimer’s in a local care center, Saturday, June 29, 2019, at the age of 75. Henrietta was a graduate of Cosmetology School in Crowley and worked as a hairstylist for 50 years. She was a member of the Boy Scout Troop #25, (where she was known for her potato salad) and the Catholic Daughters of Iowa #1377, (where she was known for her chicken salad sandwiches.) Henrietta never met a stranger and always had a smile for everyone she met. She enjoyed gardening, tending to her flowers and assisting at Karla’s in Iowa. Henrietta is survived by her children; Chris Nunez (Missy); Colleen Dunse (Harry), both of Lake Charles; Terry J. David (Kristy) of Iowa; sisters, Cheryl Stevens (Louis) of Grenada, MS; Carolyn Rawson (Tommy) of Carthage, MS; step-mother, Lera L. “Pete” Chapman of Carthage, MS; grandchildren, Brandt (Khenni) ; Brooke (Alex “Zander”); Brennon Nunez and Elaine Dunse; one great-granddaughter on the way. She is preceded in death by her husband, Douglas James “DJ” David; daughter, Johnetta Nunez; and parents. A Mass of Christian burial will be in St. Raphael Catholic Church of Iowa, Tuesday, July 2, 2019 at 10 a.m. Burial will follow in Lacassine Cemetery. Visitation begins Monday in Johnson & Brown Funeral Home of Iowa from 5 p.m. – 8 p.m., with a rosary at 6:30 p.m. and will resume Tuesday in the funeral home from 8 a.m. – 9:30 a.m. The family would like to thank Clare Bridge in Brookdale Senior Living and Ursula Labove for their compassion in caring for their mom.

Iowa &#8211; Henrietta Lane David, born July 1, 1943 in Crowley, daughter of the late Henry Lee and Elaine (Istre) Chapman, passed away after a courageous battle with Alzheimer&#8217;s in a local care center, Saturday, June 29, 2019, at the... View Obituary & Service Information

The family of Henrietta Lane David created this Life Tributes page to make it easy to share your memories.

Send flowers to the David family.