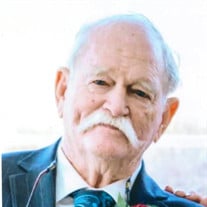 Henry “Butch” Cooke, 82, passed away on July 3rd. He was born to Henry and Adeline Cooke in Lake Charles Louisiana on September 17th, 1939. He was raised in Iowa, LA and graduated from Iowa High School in 1957. Butch was a member of the First United Methodist Church of Iowa and a member of the United Methodist Men. He was a humble man of great faith and most grateful for being a 21-year cancer survivor. He spent his career working at Olin Corp from 1959 until he retired in 1995. Butch was an avid hunter and fisherman, Captain of Krew des Lunitiques for four years, and a lifetime member of the Southwest Louisiana Fishing Club. Butch was blessed to enjoy his girls. He was always loading up their friends. He never missed their dancing, drill team, nor school events. He always laughed because he never knew how many of the girl’s friends would be asleep on the floor at night. One of his greatest joys were the family cookouts. He would invite all his friends who didn’t have family to celebrate Thanksgiving and Christmas with the Cooke family. He and Mollie also enjoyed hosting The Cooke’s Eggstravaganza, est. 2007, where at least 40 family members and friends attended. It was held on what he termed “Good Saturday.” He is survived by his wife of 63 years, Mollie Belle Barnes Cooke who was his best friend and sweetheart since 10th grade. He is also survived by his three daughters, Renee (Bill) Wiese, Darlene (Paul) Hesse, and Connie (Bill) Davis; nine grandchildren, Kevin (Meredith) Wiese, Erin Wiese, Emily (Garrett) Messina, Danielle (Michael) Rice, Jenny Haman, Lauren (Todd) Guillory, Candice (Corey) Bertrand, Stacie Davis, and Deanna (Joe) Davis; thirteen great-grandchildren, Tucker, Olivia, Jon David, Isabelle, Hayden, Cameron, Grace, Beau, Jude, Alex, Dustin, Connor, and Ireland; and two great-great-grandchildren, Addison and Jaxson. Butch also leaves behind his dear friend Benny Deters who ensured he never missed out on a hunting or fishing trip. He was preceded in death by his parents; father-in-law and mother-in-law, Ed and Gladys Barnes, who he loved as his own parents; and his beloved grandson Nathan Hesse. We are grateful to Dr. Louise Becnel, Dr. King White, Dr. Chris Thompson, and the cardiology floor of Lake Charles Memorial Hospital for their loving care. Funeral services will be held in First United Methodist Church of Iowa Wednesday, July 7, 2021, at 10 a.m. Rev. Dr. David Dewitt and Rev. Dr. Doug Ezell, officiants. Burial will follow in Pine Hill Cemetery under the direction of Johnson & Brown Funeral Home of Iowa. Visitation will begin in Johnson & Brown Funeral Home of Iowa on Tuesday, July 6, 2021, from 4:30 p.m. until 8 p.m. and will resume Wednesday in the church from 8 a.m. until 10 a.m.

The family of Henry "Butch" Cooke created this Life Tributes page to make it easy to share your memories.

Send flowers to the Cooke family.