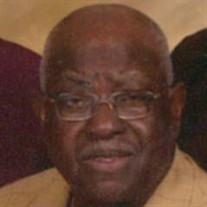 Irvin “TeTe” Joseph Jones, born on August 19, 1931, the son of Robert Jones, Sr. and Ethel Lee Cretchen, passed away in his residence Sunday, January 21, 2018 at the age of 86. “TeTe” was a graduate of Delta School of Business with a degree as a Heavy Machine Operator. He served honorably in the U. S. Army during the Korean Conflict and was a member of the American Legion. He was a member of St. John the Vianney Catholic Church, the Pastoral council, member of the Lacassine Knights of Columbus, and Knights of St. Peter Claver of Welsh. He worked for various companies including, Sweet Lake Land & Oil, Jeff Davis Police Jury, Jeff Davis Parish Sheriff’s Department, James Mallett and Coushatta in Kinder. He was a member of the M. E. T. organization that help young people learn various trades. “TeTe” enjoyed hunting, praying the rosary and extending a smile to everyone he met. He married Lucy Davis on February 22, 1953 and they enjoyed 65 years of marriage. He is survived by his loving and faithful wife of 65 years, Lucy Davis Jones; children, Mervin Jones (Annette), Cynthia Goodly and fiancé, James Carlin, Ronda Jones, Rondelian Jones Brown, Eleanor Shanell Jones and Kelly Jones Williams (Preston, Jr.); foster son, Felix Moore (Diane); 10 grandchildren and 5 great-grandchildren; host of nieces and nephews, cousins and extended family & friends. He is preceded in death by his parents; grandson, Preston Williams, III; 1 brother and 4 sisters. A Mass of Christian burial will be in St. John the Vianney Catholic Church – Bell City on Saturday, January 27, 2018 at 10 a.m. with Father John Payne as celebrant. Burial will follow in Lorrain DeRouen Cemetery under the direction of Johnson & Brown Funeral Home – Iowa. Visitation is Friday in Johnson & Brown Funeral Home – Iowa from 5 p.m. – 9 p.m., with a rosary recited at 7 p.m.

The family of Irvin "TeTe" Joseph Jones created this Life Tributes page to make it easy to share your memories.

Send flowers to the Jones family.