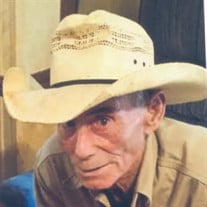 Big Lake – James Roger “JR” Daigle, Sr., born September 18, 1942 in Big Lake, son of the late Sam Daigle, Sr. and Emma (Lougue) Daigle, passed away in his home, February 25, 2019, surrounded by his loving family, at the age of 76. He was a lifelong resident of Big Lake. JR was a real cowboy, the last of a dying breed. His word was his bond. And hand shake was all he needed. He loved to hunt, fish and never wasted his catch. He was rough and tough on the outside with a heart of gold on the inside. He sat tall in his saddle and held his head up high. He loved his family unconditionally. His horses and cattle were his passion. He was proud of his cattle and the families they fed. JR made sure no one went hungry. He was a jack of all trades and never turned down anyone in need. He worked hard to support his family, no job was too big or small. He was a proud man, but never let pride get in his way. He knew no strangers and his friends became his family. He lived a full life and loved more than most. He had an amazing sense of humor. You knew he was up to no good when his cowboy hat was cocked to the side and he had a half grin on his face. Cowboy was his name. Survivors are his wife, Sandra Daigle; daughter, Laurie Ramey (Rick); sons, James Roger “JJ” Daigle, Jr. (Denise); Jared Daigle (Anje); Elmer Daigle; honorary son, Buck Stephenson (Lacey); honorary brother, Harold Broussard (Sue); sister, Yvonne Morgan; brothers, Sam Daigle, Jr. (Theresa); LP Daigle (Polly); OJ Daigle (Diane); Martin Daigle; EJ Daigle; grandchildren, Heather Royer (Coty); Sandra Shaheen (Jacob); Mariah Smith (Ty); great-grandchildren, Nathen; Maddy; Tuesday; Little Jake; Neosha and Eathen. He is preceded in death by his parents; brother, Melvin Daigle and honorary sister, Daisy Askew. Cremation has been entrusted to Johnson & Brown Funeral Home of Iowa. Services will be held at a later date.

The family of James Roger "JR" Daigle Sr. created this Life Tributes page to make it easy to share your memories.

Send flowers to the Daigle family.