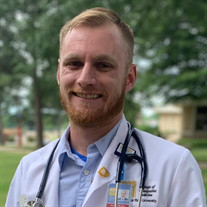 Memphis, Tennessee – Jarrett Scott Nunez, born on April 22, 1996, son of R. Scott Nunez and Felisha Nicole Schultz Nunez, passed away Saturday, September 18, 2021, at the age of 25. Jarrett, a graduate of Grand Lake High School, was very active in 4-H, student organizations, swim team, and community service. He served as the coach for Sam Houston High School swim team in Moss Bluff as he finished his undergraduate degree. He was a graduate of McNeese State University with a major in Chemistry. Currently, he was working clinical rotations in Memphis at Baptist Hospital Emergency Department as a 3rd year medical student of New York Institute of Technology College Osteopathic Medicine at Arkansas State. He was a student ambassador, and secretary of Student American Academy of Osteopathy, class representative of the Student Government Association, member of Student of Osteopathic Medicine Association, and American College of Emergency Physicians. Jarrett enjoyed gathering with friends and family to share his love of Cajun cooking with them. He loved helping people and showing the love of Christ through his actions. He loved to dance and music spoke to his soul. He found his passion working in the emergency department. He lived a bold and adventurous life in his short 25 years. He is survived by his parents, R. Scott and Felisha Nicole (Schultz) Nunez; siblings, Kane Nunez and Ellie Nunez; paternal grandparents, Ted and Becky Trahan; maternal grandparents, Ron & Elaine Schultz; uncles, Randy and Dena Nunez; Brett and Kelly Schultz; numerous cousins, and his beloved lab, Riley. A Mass of Christian burial will be held in St. Raphael Catholic Church on Tuesday, September 28, 2021, at 10 a.m. with Monsignor James Gaddy, Celebrant. Burial will follow in Sweet Lake Grand Lake Cemetery under the direction of Johnson & Brown Funeral Home of Iowa. Visitation will begin in St. Raphael Catholic Church on Monday from 4:30 p.m. until 8 p.m., with a Rosary at 6 p.m. and will resume Tuesday from 9 a.m. until the time of service at 10 a.m. Pallbearers assisting in his service will be Randy Nunez, Brett Schultz, Evan Schultz, Garret Pole, Andres Jasso, and David Guidry. Honorary pallbearers are his NYITCOM family. **Per the request of St. Raphael, no food or drink will be allowed in the church.**

The family of Jarrett Scott Nunez created this Life Tributes page to make it easy to share your memories.