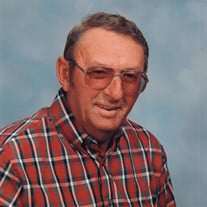 Julian Arrant was born on April 23, 1929 in Grand Chenier, Louisiana and passed away on Tuesday, April 2, 2019 in his residence surround by his loved ones at the age of 89. He didn’t get to meet his mother, Amable Sturlese Arrant, because she died 3 1/2 hours after he was born. He was raised in the same house he was born in by his grandparents, Lucien & Azena Sturlese. He was surrounded by his aunts and uncles that helped raise him. During his childhood, he would go visit his cousins in Pecan Island, he made the first motorized bike that he rode all over Cameron Parish, trapped minks, and was an altar server at St Eugene Catholic Church. When he was 17, he went to live with his father, Julian Wolfe Arrant, in Houston, Texas, where he first worked in Houston Shipyard and was a roustabout for about a year. He headed back to Grand Chenier, and went to work for Crain Brothers as a crew boat Captain. After starting to work there, he met and married Opal Ditch of Pecan Island and they had a daughter that was stillborn and three sons, Michael, Bryan, and Mark. In 1968, he met Margaret LeBouef, from Port Arthur, Texas. They were married on June 26, 1969, and had a daughter, Julie and son, Matthew. He worked as a crew boat Captain until he was around 20 and Ned Crain asked him if he wanted to learn how to run a Dragline and trained him in 5 months, by being his oiler. That became his life-long passion. John Paul Crain gave him a new Lima Dragline and he worked and train many other men to be operators for Crain Brothers, the State, and Wildlife and Fisheries. He had many oilers, where he built levees, roads, setup pipelines, locations for meter runs & oil rigs, drove pilings, built docks from New Orleans to Houston. He was a member of St John Vianney Catholic Church, Bell City, since 1997 and member St Eugene in Grand Chenier for many of his childhood and adult years. He was a member of the operator’s engineers #406, he also attended Grand Chenier High School & Lamar College. He is survived by his wife, Margaret; daughter, Julie Racca (Don); sons, Bryan Arrant (Ellen); Mark Arrant; and Matthew Arrant (Helen); foster daughters, Bonnie Vidrine and Ashley Doxey. He had 11 grandchildren, 19 great grandchildren, 2 great-great grandchildren; sister, Juanita Dreath; many nieces & nephews. He is preceded in death by his mother, Amable Sturlese, grandparents, Lucien & Azena Sturlese; father, Julian Wolfe & stepmother, Lois Arrant; sisters, Jaunice; Betty; and Elois; Godfather, Uncle Oscar Sturlese; numerous aunts & uncles; infant daughter; son, Michael Arrant and grandson; Dwayne; mother of his three sons, Opal Ditch. Pallbearers assisting in his service are Kendal Boudreaux; Jay McGee; Garrett Arrant; Landon Arrant; Christopher McGee; Don Racca, Jr.; Matthew Arrant, Jr.; and Aaron Istre. Visitation will begin Friday, April 5, 2019 from 3 p.m. - 9 p.m. in Johnson & Brown Funeral Home of Iowa, with a cursillo rosary recited at 6:30 p.m. The Funeral Mass will be in St. John Vianney Saturday, April 6, 2019 at 11 a.m. with Father John Payne and Father Roland Vaughn officiating. Cremation will follow the service under the direction of Johnson & Brown Funeral Home of Iowa.

Julian Arrant was born on April 23, 1929 in Grand Chenier, Louisiana and passed away on Tuesday, April 2, 2019 in his residence surround by his loved ones at the age of 89. He didn&#8217;t get to meet his mother, Amable Sturlese Arrant, because... View Obituary & Service Information

The family of Joseph Julian "Turkey" Arrant created this Life Tributes page to make it easy to share your memories.

Send flowers to the Arrant family.