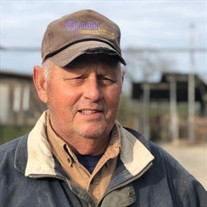 Joseph Howard “Butch” Racca, Jr, 75, of Iowa, LA, died early on Friday, November 6, 2020 in his sleep. Mr. Racca was born August 4, 1945 in Jennings, LA. He lived in Jennings, graduating from Jennings High School. He attended The University of Southwestern Louisiana where he also served in the Louisiana National Guard. After graduating with a degree in Agriculture Education, he moved to Iowa where he became the first Vocational Agriculture teacher and started the Iowa FFA chapter at Iowa High School. In 1979, he accepted an Operator position at PPG industries in Westlake where he worked until his retirement in 2005. Mr. Racca was a long-time supporter and highly active in the Louisiana Agriculture and Livestock industry. He served as President of the Louisiana Pork Producers Association and was a member of the Louisiana State Animal Health Board. Mr. Racca is survived by his wife, Joyce Morgan Racca; his daughter, Jennifer Racca Kershaw and her husband Tim; his sons, Chad Racca, Brad Racca and his wife Devin; his mother, Rita Broussard Racca; sisters, Judy Andrepont and her husband, Dennis and Jane Sneed; 5 grandsons, David, Zachary, Jacob, Grant, and Cougar; and granddaughter, Brianna. He was preceded in death by his father, Joseph Howard Racca and his brother, Steven Earl Racca. His funeral service will be held at Johnson & Brown Funeral of Iowa Wednesday, November 11, 2020 at 11 a.m. Dr. David DeWitt will officiate. Burial will follow in Greenwood Cemetery. Visitation is Tuesday from 5 p.m. until 8 p.m. Visitation will continue on Wednesday from 8 a.m. until the time of service at 11. In lieu of flowers, donations may be made to the Louisiana FFA Foundation Student Teacher Scholarship Fund, 224 John M. Parker Coliseum, Baton Rouge, LA 70803 or www.laffa.org.

The family of Joseph Howard "Butch" Racca Jr. created this Life Tributes page to make it easy to share your memories.

Send flowers to the Racca family.