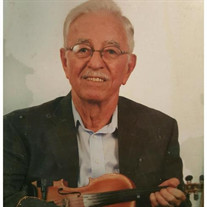 LATEN THOMAS MILLER, 87, surrounded by his children and family, went home to be with the Lord, his wife and other family members on April 19, 2016. He was born July 3, 1928 to Henry and Martha (Darbonne) Miller in Mallet, LA. As a young boy, he moved to Holmwood, LA where he and his siblings attended Bell City High School then later moved to Lake Charles and lived out his life. He served his country in the U. S. Army from 1950 to 1952 as a Sargent 1st Class in the Korean War. On February 14, 1953 he married long-time family friend, Betty Jane Richard. He often spoke with his children about pulling her in a wagon when they were young. Laten and his wife Betty, were living examples of TRUE love and what a GREAT marriage should be like to their children. They were inseparable and you could not have found a man who was more loving, patient, respectful, and dedicated to his wife and children. He was TRULY A GREAT EXAMPLE and BLESSING to all who knew him. He was the owner and operator of Miller’s Heating & A/C and later went on to be an electrician for the City of Lake Charles. After his retirement at the early age of 62, he spent the rest of his years working in his home based wood shop better known as “The Chank a Chank Shop”. By his side was his dedicated and devoted assistant and wife, Betty. He was VERY talented and handcrafted many pieces of beautiful furniture and many other things for his grandchildren and family. He hand-carved and crafted 4 violins which were to be handed down to his 4 children. His most challenging talent and love was handcrafting the 137 Cajun accordions he built. They were better known as the “Cajun Classic”. Mr. Miller’s accordions were shipped all over La, the US and some out of country. He poured his talent and heart into each and every accordion he built. His love for Cajun music was well known by all however, above that his love for his wife, children and grandchildren was an Example to all who knew him. Laten and his wife Betty was members of the Cajun French Music Association for many years and he was inducted into the Cajun Music Hall of Fame in 2008. Left to cherish his memories are two sons, Lynn Miller (wife Elizabeth), David Miller and (wife Janet) all of Lake Charles; two daughters, Pam Hymel (husband Wendell), Sheila Rather (husband Gerald) both of Holmwood; 9 grandchildren; Jennifer Fontenot, Joshua Miller, Jerred Hymel, Marlaena Miller, Monica Miller, Jamie Hymel Wolfe, Michael Rather, Zachary Miller and Tyler Rather;13 great grandchildren and 2 great -great grandchildren; brother; Harry Miller of Sulphur, sister, Beverly Liprie; sister in law, Sybil Richard and many special nieces and nephews. He was preceded in death by his wife of 63 years, Betty Richard Miller, his parents and four brothers, Wilfred (Twill) Miller and wife Dorothy, Russell Miller and wife Goldie, Hasting Miller and wife Eula, Harold (Blackie) Miller and wife Pearl; mother in law, Gladys Shuff; brother in laws, Paul Howard (Ben) Richard, Tony Liprie & sister in law, Sue Miller and nephews & nieces. Laten & Betty had many wonderful friends and they cherished the time they spent with them all visiting, laughing, and dancing to Cajun music. There are three people that were very dear to them and their children will forever be grateful to, Jack & Marie Stegall and their sister in law, Sybil Richard. Thank you all for everything you’ve ever done for our parents and you know what that is. Also, want to thank Harbor Hospice staff and Chaplains for all your care and prayers you gave to our parents. To all of their caregivers, Thank You and to Rica who had been with him since before his wife died in January. You were a life saver and your giggle just somehow kept him where he needed to be. And lastly, to Joe & Kelli Johnson with Johnson Brown Funeral Home for all your help and compassion after the deaths of both of our parents. Funeral services will be Friday, April 22, 2016 at 11 a.m. in Johnson & Brown Funeral Home of Iowa with Monsignor Jace Eskind officiating. Burial will follow in Highland Memory Gardens. Visitation is Thursday from 5 p.m. – 9 p.m. with a rosary at 6:30 p.m. and will continue Friday from 8 a.m. until the time of service at 11 a.m. Pallbearers are grandsons; Joshua Miller, Jerred Hymel, Michael Rather, Zachary Miller and Tyler Rather, Joe Wolfe and great grandsons, Joey Granich & Jaden Wolfe.

LATEN THOMAS MILLER, 87, surrounded by his children and family, went home to be with the Lord, his wife and other family members on April 19, 2016. He was born July 3, 1928 to Henry and Martha (Darbonne) Miller in Mallet, LA. As a young boy,... View Obituary & Service Information

The family of Laten Thomas Miller created this Life Tributes page to make it easy to share your memories.

LATEN THOMAS MILLER, 87, surrounded by his children and family,...