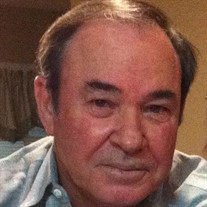 Lake Charles- Lawrence Matthew Ardoin (Larry), 67, of Lake Charles, La., passed away peacefully on Sunday, December 21, 2014. Larry was born September 21, 1947 to the late Anatole & Lucy Ardoin. He graduated from Landry High School in 1965 & was a U.S. Navy Veteran who served during the Vietnam War. Larry worked as a board operator for many years at LA Pigment before retiring in 2009. The most important thing to Larry was family. He was one of the rare few who enjoyed doing for others more than for himself. Larry enjoyed the simple things in life; drinking a cold beer, family cookouts & mowing his grass. Larry is survived by his daughter, Christy Ardoin Cryer & husband Cody Cryer of Houston, TX; brother, Pye Hamolka & wife Brenda of Lake Charles; sister, Gracie Sonnier & husband Van of Lake Charles; nephews, Ricky Hamolka, Blain Sonnier & wife Liz, Josh Sonnier; niece, Kiisha Breaux & husband Bill; 3 great nephews, 2 great nieces & 1 great great niece. Longtime friend, Steve Miller. Preceded in death by his parents, Anatole & Lucy Ardoin & brother Robert “Joe” Ardoin. As per Larry’s wishes, there will be no funeral. A memorial service will be held at Johnson & Brown Funeral Home on Saturday, December 27, 2014 at 12 p.m. Visitation will begin at 10 a.m. til the time of memorial service. Cremation is under the direction of Johnson & Brown Funeral Home. ALS may have taken Larry’s life, but it did not define it. The family ask for those who wish to honor his memory to do so by performing a random act of kindness, something he did time & time again throughout his life. Words of comfort may be shared at www. johnsonandbrownfuneralhome.com or Facebook: Johnson & Brown Funeral Home

The family of Lawrence Matthew Ardoin (Larry) created this Life Tributes page to make it easy to share your memories.

Send flowers to the Ardoin family.