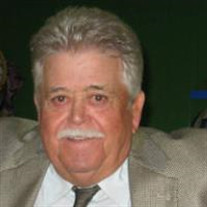 Lawrence Hoffpauir, 81, passed away peacefully on June 6, 2018 at his home surrounded by his family. He was born on October 26, 1936 in Acadia Parish to Allen and Marie Hoffpauir, the youngest son of 10 children. A native of Hayes, Lawrence worked as a mechanic owning his own business Hoffpauir’s Service Station for 25 years, then retiring from Lake Charles Regional Airport after 25 years of service. After retirement, he worked as maintenance supervisor for St. John Vianney Catholic Church in Bell City. Lawrence was a member of the Bell City Knights of Columbus 3048 serving as Grand Knight and received Knight of year in 1985. He served as a board member of the Ward 2 Fire District from 1989–2017 and also served as Constable of Ward 2 for 18 years. Still living life to the fullest through simple pleasures, growing a garden, visiting with friends, tinkering in his shop and spending time with his family. He had an uncanny ability to reach out to young people in a positive way, they were drawn to him. Lawrence was a loving husband, father, grandfather, great-grandfather and friend to all. He never met a stranger and was known to be quite a character He is survived by his loving wife of 58 years, Ann Hoffpauir; two daughters, Duanne Hoffpauir, Angelia Decoteau (Lyle); four grandchildren, Kyle Fox (Jill), Kate Fox, Kash and Cody Decoteau; three great-grandchildren, River Fox, Grayson Fox and Kamron Reber; sister, Alice Guidry. A Mass of Christian burial will be in St. John the Evangelist Catholic Church in Lacassine, Saturday, June 9, 2018 at 11 a.m. with Father Roland Vaughn and Father Rojo Antony officiating. Burial will follow in Lacassine Cemetery under the direction of Johnson & Brown Funeral Home of Iowa. Visitation is Friday in Johnson & Brown Funeral Home of Iowa from 2 p.m. until 9 p.m., with a rosary at 6 p.m. followed by a celebration of life and visitation will resume Saturday from 8 a.m. until 10:30 a.m. in the funeral home. Special thanks to Brighton Bridge Hospice for their endless compassion and support; Taylor, Lauren, Pat, Don, Jill, Anna, John, Sandi and Dr. Brian Clements.

Lawrence Hoffpauir, 81, passed away peacefully on June 6, 2018 at his home surrounded by his family. He was born on October 26, 1936 in Acadia Parish to Allen and Marie Hoffpauir, the youngest son of 10 children. A native of Hayes, Lawrence... View Obituary & Service Information

The family of Lawrence Hoffpauir created this Life Tributes page to make it easy to share your memories.

Send flowers to the Hoffpauir family.