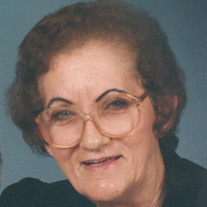 LeBleu Settlement – Nadline Coy LeBleu, 81, passed away Tuesday, January 5, 2016 in her residence surrounded by her loving family. Nadline was born in Chloe on June 6, 1934 to the late Lawrence and Sadie (Hoffpauir) Cady. She was married to the late Dudley Joseph LeBleu on August 12, 1950. Nadline worked for 16 years as an Assistant cafeteria manager at Iowa High and resided in LeBleu Settlement most of her life. She was a loving wife, mother, grandmother, great-grandmother & great- great grandmother. Her family meant everything to her. She is survived by daughter, Melinda Joy Courville (Larry) of LeBleu Settlement; grandchildren, Shellie Fontenot (Jerry) of Reeves, Alan (Duke) Soileau (LaTasha) of Reeves, Quincy Soileau (Sherry) of LeBleu Settlement, Quentin Soileau of LeBleu Settlement; great grandchildren, Jeffery, Kristin, Allison, Abbie, Caitlyn, Ethan, Caleb, Shyann; great-great grandchildren, Madison, Chloe, Caden, Joseph; 2 sisters, Carma Fay Hunt (Nick) and Reba Joy Mott (Stanford). Nadline is preceded in death by her spouse; parents and siblings, Patsy Meyers and Larry Cady. Funeral services will be Friday, January 8, 2016 at 11 a.m. with Pastor Rick Batchelor officiating in Johnson & Brown Funeral Home. Burial will follow in LeBleu Cemetery of Lake Charles under the direction of Johnson & Brown Funeral Home. Visitation is Thursday from 5 p.m. until 9 p.m. and continues Friday from 8 a.m. until the time of service at 11 a.m. in the funeral home. The family would like to thank all the family and friends for all the help and prayers they gave and would especially like to express sincere gratitude to Heart of Hospice for everything they did to make her last days on earth easier.

LeBleu Settlement &#8211; Nadline Coy LeBleu, 81, passed away Tuesday, January 5, 2016 in her residence surrounded by her loving family. Nadline was born in Chloe on June 6, 1934 to the late Lawrence and Sadie (Hoffpauir) Cady. She was married... View Obituary & Service Information

The family of Nadline Coy LeBleu created this Life Tributes page to make it easy to share your memories.

Send flowers to the LeBleu family.