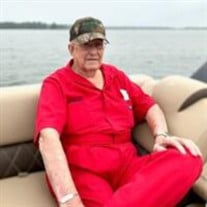 Nelson Jules Guillotte, 88, of Brookshire, Texas, was called home to be with our Lord and Savior on Wednesday, September 30, 2020. Nelson was born on December 25, 1931, in Lacassine, Louisiana to Victor and Victorine Guillotte. He grew up and attended school in Bell City, LA. He was drafted into the Marines during the Korean War and served from 1952 to 1954. On June 5, 1954, Nelson was united in marriage to Mary Daisy Istre in Bell City. Nelson and Daisy resided in Bell City until 1963 when they moved and established their home in the Brookshire, TX where they have been members of Sacred Heart Catholic Church for 57 years. During that time frame Nelson operated the rice dryer for GP Nelson Farms for 25 years. Nelson was a faithful & devoted husband and father. He enjoyed fishing, hunting, camping, boating, gardening, raising livestock and spending time with his family. He also enjoyed woodworking and created various heirlooms for his family. He enjoyed it so much that he and Daisy designed & built the house they have resided in for the past 36 years. Other hobbies included playing the guitar, dancing with his 5 daughters, mentoring his son and fellowship with the seniors at First Baptist Church of Brookshire, TX. Nelson is survived by his son: Hubert Guillotte and wife, Tina, of Brookshire; daughters: Florinda Parnell of Brookshire, Vickie Meier and husband, Herc, of Fulshear, Cheryl Fawvor and husband, Dan, of Katy, Carol Obenberger and husband, Ric, of Deer Park, Suzanne Bockhorn and husband, Ronnie, of Brenham; 18 grandchildren; 36 great-grandchildren; and numerous nieces, nephews, other family members, and many friends. He was preceded in death by his parents, wife: Daisy; son: Herbert Jules Guillotte; grandson: Hubert C. Guillotte, II; son-in-law: Harry Parnell, Jr.; siblings: Roy, Agnes, Eula & Ella. Rosary and Funeral services will be held on Saturday, October 3, 2020 beginning at 2 p.m. in Johnson & Brown Funeral Home of Iowa. Rev. Roland Vaughn, Officiant. Burial will follow in Lacassine Cemetery. Visitation begins at 12 p.m.

Nelson Jules Guillotte, 88, of Brookshire, Texas, was called home to be with our Lord and Savior on Wednesday, September 30, 2020. Nelson was born on December 25, 1931, in Lacassine, Louisiana to Victor and Victorine Guillotte. He grew up and... View Obituary & Service Information

The family of Nelson Jules Guillotte created this Life Tributes page to make it easy to share your memories.

Send flowers to the Guillotte family.