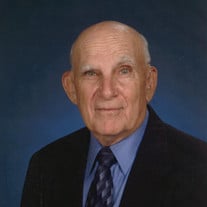 Philip W. Miller, 81, passed away Saturday, August 13, 2016 in a local care facility. Born in Jennings to the late Philip W. and Eva (Roberts) Miller on July 27, 1935, Philip was a graduate of Iowa High School while living at Boys Village. He went on to attend ULL (formerly known as Southwestern Louisiana Institute) and graduated with a BS in accounting. He served in the U.S. Army and later his reserve unit was called to active duty during the Berlin Crisis. In 1959, he began his career in public service, spanning four decades as an accountant and executive director for the Lake Charles Housing Authority. He was an active member of the National Association of Housing & Redevelopment Officials since 1961 and received many prestigious awards for his outstanding service. The Philip Miller Award of Excellence is named in his honor. After 22 years of service, he founded Miller & Associates, and later Miller & Associates Computer Services. Mr. Miller was an astute businessman and earned recognition from his peers. He made an impact in Calcasieu Parish and Southwest Louisiana and served the town of Iowa as mayor and performed his civic duty with great pride. Mr. Miller was a generous man; wore the mantle of community service with compassion willingly while extending courtesy to all. He was a man of unfaltering faith and a member of First United Methodist Church, where he was chairman of the board, long-time finance chairman and choir member. Survivors include his loving wife of 60 years, Marlene Spell Miller; children, Gregg Miller and wife, Judy, Chris Miller and wife, Gena and Darren Miller and wife, Tammy; brother, Leon Leger and wife, Anna; 6 grandchildren, Joshua Miller and wife, Jess, Shelby Miller, Jake Miller, Justin Miller, Alexa and husband, Gage Ritter, Bailee Miller and 1 great-grandchild, Emery Miller. He is preceded in death by his parents; step-mother, Patricia Noonan Miller; sisters, Bertha Benoit and husband, Brennen, Dorothy Evans and husband, Houston. Visitation begins Tuesday, August 16, 2016 in Johnson & Brown Funeral Home from 4 p.m. – 8 p.m. and resumes in First United Methodist Church of Iowa on Wednesday from 9 a.m. – 11 a.m. Funeral services are Wednesday, August 17, 2016 at 11 a.m. with Dr. David DeWitt officiating. Burial will follow in Pinehill Cemetery under the direction of Johnson & Brown Funeral Home. The family would like to give special thanks to a wonderful caregiver and friend, Jennifer Ardoin. Memorials may be made to the Barbara Gray Scholarship or the FUMC memorial fund, c/o First United Methodist Church, P. O. Box 668, Iowa, LA 70647.

Philip W. Miller, 81, passed away Saturday, August 13, 2016 in a local care facility. Born in Jennings to the late Philip W. and Eva (Roberts) Miller on July 27, 1935, Philip was a graduate of Iowa High School while living at Boys Village.... View Obituary & Service Information

The family of Philip W. Miller created this Life Tributes page to make it easy to share your memories.