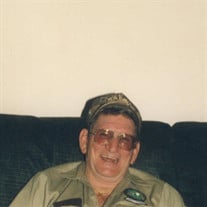 Basile- Richard “Speck” Hebert, 79, passed away Sunday, January 1, 2017 in his residence. Richard was born in Jefferson Island on March 6, 1937 to the late Hillaire and Alta (Richard) Hebert and lived most of his life in Cameron. He enlisted in the U.S. Navy on January 4, 1956 and was released on October 3, 1957 due to Hurricane Audrey. After the hurricane, Richard returned to the U.S. Navy and was honorably discharged on January 3, 1962. He worked offshore for 49 years in production. Known as a jokester, he was always pulling pranks on most everyone he knew. He enjoyed hunting and fishing in his spare time. Richard was a 3rd Degree Knight with the Cameron Knights of Columbus. He is survived by his wife, Lauralene “Kriket” Hebert; children, Ladd Hebert, Tina Payne, Randall Hebert and wife, Renee and Norman Hebert; step-children, Henry Gayneaux and wife, Jennifer, Helen Nuckols and Carmen Gayneaux; siblings, Claude Hebert and wife, Vernie and Eldie Cheramie; grandchildren, Justin and Blake Payne, Hunter and Katelynn Hebert; step-grandchildren, Shane Chimeno, Bly Nuckols, Dannille, Michelle and Curtis Gayneaux; mother of his children, Lucille Hebert, and numerous nieces & nephews. Preceding him in death were his parents and sister, Betty Savoy. Visitation begins Tuesday, January 3, 2017 in Johnson & Brown Funeral Home from 5 p.m. – 9 p.m., with a rosary at 6 p.m. and will resume Wednesday from 8 a.m. until the time of service at 11 a.m. in the funeral home with Father Roland Vaughn officiating. Burial will follow in Pine Hill Cemetery. Pallbearers assisting in his service are Ladd, Norman, Randall and Hunter Hebert, Justin and Blake Payne. Honorary are Brandon Hebert, Giz Guilbeaux and Shane Chimeno.

Basile- Richard &#8220;Speck&#8221; Hebert, 79, passed away Sunday, January 1, 2017 in his residence. Richard was born in Jefferson Island on March 6, 1937 to the late Hillaire and Alta (Richard) Hebert and lived most of his life in Cameron.... View Obituary & Service Information

The family of Richard "Speck" Hebert created this Life Tributes page to make it easy to share your memories.

Send flowers to the Hebert family.