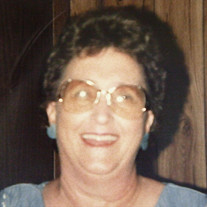 Rita Lou McCluskey Cameron – Rita Lou McCluskey, 83, a loving mother, grandmother and great-grandmother, passed away Tuesday, October 14, 2014, surrounded by her loving family. Rita was born in Oakdale to the late Wallace Marvin Singletary and Beulah Hamilton on January 28, 1931. She graduated from Oakdale High School and married her late husband, Gerald Thomas McCluskey whose military career allowed them to travel the United States and Germany, but always called Cameron home and they settled there in 1976. She was the manager of Steed’s Shrimp Company until 1990. During the years in Cameron, she was a member of the First Baptist Church of Cameron and was involved in the church choir & activities. Rita enjoyed woodworking, sewing, gardening and playing the piano. She is survived by her 2 sons, Thomas McCluskey and wife, Cathryne of Midland, Texas and Marvin Douglas McCluskey and wife, Deleta of Oakdale, Louisiana; 4 daughters, Rebecca Louise Benoit and husband, Gary of Indian Village, Louisiana, Margie Vincent of Cameron, Louisiana, Barbara McCluskey of Cameron, Louisiana and Angie Bott of Indian Village, Louisiana; 1 sister, Wanda Glaze of Norfolk, Nebraska; 8 grandchildren and 7 great- grandchildren. She is preceded in death by her husband, Gerald Thomas McCluskey; parents; siblings and 1 grandchild.

The family of Rita Lou McCluskey created this Life Tributes page to make it easy to share your memories.

Send flowers to the McCluskey family.