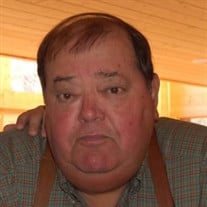 Captain Rodney Abshire, born on August 18, 1950 in Lake Arthur, peacefully passed away surrounded by his loving family on Thursday, June 3, 2021, at the age of 70. He was a 1968 Graduate of Welsh High School and immediately entered the workforce where he would build an illustrious career in the oil and gas industry. Working his way from a green horn deckhand to an Operations Manager, including obtaining a 1,600-Ton Master License, Rodney remained his wonderful, humble self. He retired from GulfMark in 2015, but never really stopped working. Rodney married the love of his life, Karla Frederick Abshire, on June 12, 1970. Together they would build a wonderful life including raising two hardworking sons, Allen Ray (Samantha) and Rodney James. Eventually, they would be blessed with two amazing grandchildren, Zachary Allen (girlfriend, Sarah Daniel) and Madison Angelle who became their world. Chef Rodney loved nothing more than cooking a great feast and having a whole bunch of people over to visit with and feed. He is also survived by his brothers Wilson Abshire (Ellen) and Thomas Abshire (companion Sherry Guidry), his sisters, Martha Breaux (Gilbert “deceased”) and Gloria Trahan (Ricky); in-laws, Janet Stein (companion Malcolm), Andrea Lide (Al), and Gilda Mallet (Donald); and numerous godchildren, nieces, and nephews whom he treated like they were his own children. Rodney was preceded in death by his parents, Clifford Abshire and Diana Abshire; stepfather, Alec Abshire; son, Kevin John; brother, Chester Abshire; and in-laws, Angelus Frederick, Elsie Frederick, Roy Frederick, Charles Frederick, and Greg “Leach” Stein. Funeral services will be held in Johnson & Brown Funeral Home in Iowa on Monday, June 7, 2021 at 12 p.m. Rev. Roland Vaughn, Celebrant. Burial will follow in Oaklawn Cemetery in Welsh under the direction of Johnson & Brown Funeral Home. Visitation will begin on Monday at 10 a.m. in the funeral home.

Captain Rodney Abshire, born on August 18, 1950 in Lake Arthur, peacefully passed away surrounded by his loving family on Thursday, June 3, 2021, at the age of 70. He was a 1968 Graduate of Welsh High School and immediately entered the workforce... View Obituary & Service Information

The family of Rodney Abshire created this Life Tributes page to make it easy to share your memories.

Send flowers to the Abshire family.