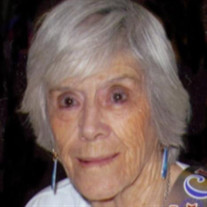 Ruby Trahan Stratton, 93, passed away peacefully on Tuesday, January 8, 2019, at her Lake Charles home surrounded by family. Mrs. Stratton was a longtime Lake Charles Police Department veteran. She was secretary to the chief at the LCPD for 29 years, and honored as Officer of the Year in 1986. “Ms. Ruby” joined the force in 1957, when the LCPD had just two patrol cars, and went on to serve four police chiefs: J.H. Hebert, Pete Stout, Jimmy Gwatney and Sam Ivey. She worked with more than 1,000 members of the force at the LCPD over the years—recording each of their names by hand in a personnel booklet she kept at her desk, Mrs. Stratton was a member of the Fraternal Order of Police, Louisiana Peace Officers Association, Louisiana Municipal Police Officers Association and Louisiana Secretaries of Chief of Police. Upon her retirement, she received the Southwest Louisiana Bar Association’s Law Enforcement Award. She was honored by the LCPD as “the stabilizing factor that kept the operations running smoothly” in a commendation that was signed by more than 70 members of the force. A native of Evangeline, she was a longtime Lake Charles resident. Mrs. Stratton is survived by her two sons, Greg A. Stratton and wife Heather Ryan Kelley of Lake Charles, and Gary Lynn Stratton and wife Kelley Mallett Stratton of Moss Bluff; one brother, Richard Trahan of Sulphur; one sister, JoAnn Meador of Atlanta, Georgia; two grandchildren, Brittany Stratton Trahan and husband Caleb of LeBleu Settlement, and Brooklyn Stratton of Austin, Texas; and two great-grandchildren, Cason Trahan and Blaise Stratton. Funeral services are Saturday, January 12, 2019 in Johnson & Brown Funeral Home of Iowa at 1 p.m. with Bro. Roy Platt officiating. Burial will follow in Lacassine Cemetery. Visitation is Saturday from 10 a.m. – 1 p.m.

Ruby Trahan Stratton, 93, passed away peacefully on Tuesday, January 8, 2019, at her Lake Charles home surrounded by family. Mrs. Stratton was a longtime Lake Charles Police Department veteran. She was secretary to the chief at the LCPD for... View Obituary & Service Information

The family of Ruby Trahan Stratton created this Life Tributes page to make it easy to share your memories.

Send flowers to the Stratton family.