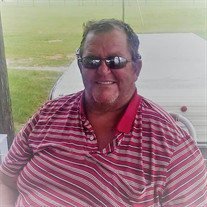 Thomas Benoit of Kinder, born March 3, 1953, son of the late George Winston & Sylvia Eve (Dupuis) Benoit, passed away Friday, May 4, 2018, at the age of 66. Thomas was a graduate of South Cameron High School & a member of St. Eugene Catholic... View Obituary & Service Information

The family of Thomas Gary Benoit created this Life Tributes page to make it easy to share your memories.

Send flowers to the Benoit family.