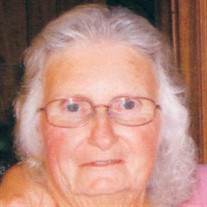 Trudie Mae Lloyd Kendrick, 90, passed away Wednesday, August 29, 2018, in Beauregard Memorial Hospital in DeRidder, Louisiana. She was born and raised in Folkston, Georgia on December 22, 1927 to the late Charlie and Clara (Knowles) Lloyd. Trudie moved to Jacksonville, Florida as an adult and lived there until moving to Lake Charles to be near her daughter, Regena “Jeanie” Nichols. She loved taking care of children and tending to her flowers. She is preceded in death by her parents; siblings, Edward, Paul, Richard, Franklin, Archie Lloyd and Dorothy Nelson; daughter, Loretta Christine Selby; grandson, Ron Bennington; husbands, Charlie Kendrick and Oscar Spradley (father of her 2 daughters). She is survived by her daughter, Regena “Jeanie” Nichols; grandchildren, Kenny Nichols (Carrie), Christine Richard (Tim) and Renee Monceaux (Robert); 6 great-grandchildren and 2 great-great-grandchildren. Visitation is Saturday, September 1, 2018 in Johnson & Brown Funeral Home of Iowa from 2 p.m. – 4 p.m. Visitation and Funeral services will be in Shepard-Roberson Funeral Home, 526 Oakwood St., Folkston, Georgia, 31537 on Friday, September 7, 2018, beginning at 11 a.m. until the time of service at 1 p.m. Burial will follow in Camp Pinckney Baptist Church Cemetery in Folkston, Georgia under the direction of Shepard-Roberson Funeral Home of Folkston, Georgia. In lieu of flowers, donations may be made to the National Hemophilia Association.

The family of Trudie Mae Lloyd Kendrick created this Life Tributes page to make it easy to share your memories.

Send flowers to the Kendrick family.