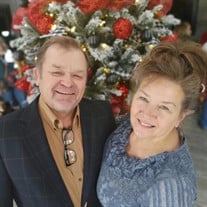 Walter David “Bubba” Jones, born in Winnsboro on December 31, 1957, son of David and Joyce Rowena (Parker) Jones, departed this life for his Heavenly home on November 30, 2021, at the age of 63. Bubba, a graduate of Fort Necessity High School, was employed as a supervisor for Turner Industries for over 33 years. He was a longtime member of Livingway, where he served as an usher, greeter, but more importantly, he served as a worshipper. Bubba enjoyed cooking for his family, especially his pecan pies, fried fish, and the absolute best oatmeal & peanut butter cookies. He was an avid sports fan, especially the LSU Tigers. He is preceded in death by his father, David Jones. Survivors are his loving wife of 35 years, Annette Jones; mother, Joyce Jones of Jigger, LA; children, Stacie LaDonna Blaney and husband, Ronald “Boo” Blaney, Jr. of Vidalia, LA; Rachel Broussard and husband, Stacey of Longville; Stephanie Whittington and husband, Heath of Vidalia; Joshua Joiner of Gonzales, and Walter David Jones, Jr. and wife, Kendale of Lake Charles; sister, Debbie Jones; Cindy Jones, and Pam Jones and 10 precious grandchildren to cherish his wonderful memory. He is also survived by numerous nieces, nephews and other family members. A Celebration of Life will be in Livingway in Lake Charles on Friday, December 3, 2021, at 1 p.m. with the Revs. Charles R. Nugent, Pastor Brent Keating, Pastor Grady O’Neal, and Pastor Tim Deason officiating. Burial will follow in Pine Hill Cemetery under the direction of Johnson & Brown Funeral Home of Iowa. A gathering of friends and family will begin in the church from 11 a.m. until the time of service at 1 p.m.

The family of Walter David "Bubba" Jones created this Life Tributes page to make it easy to share your memories.

Send flowers to the Jones family.