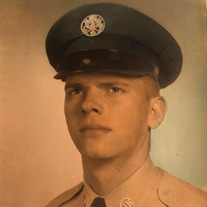 Iowa – William “Bill” L. Perdue, born on January 10, 1933 in Battle Creek, MI, son of Charles E. and Pearl M. (Hopkins) Perdue, passed away February 6, 2018 in a local hospital at the age of 85. Bill was a graduate of Iowa High School and served in the U. S. Air Force. He retired from Conoco, now known as Sasol. He could fix anything, was an excellent mechanic, meticulous carpenter, having built his own home. Bill enjoyed working in his yard and tending to his rose bushes. He had a love of travel, especially the process of calculating the miles and routes. He is survived by his loving wife of 61 years, Betty (Smallwood) Perdue; daughters, Lisa Joan Perdue of Williamsburg, VA and Tina Ann Perdue of Iowa; grandchildren, William G. Perdue of Shreveport, Benjamin L. Perdue (Kelly) of Chesapeake, VA; great-grandchildren, Stella and Zachary Perdue; and a host of nieces and nephews. He is preceded in death by his son, Gary Lynn Perdue; parents; siblings, Lawrence, Charles, Dorothy, Esther, James, Martin and Robert. Funeral services will be in Johnson & Brown Funeral Home – Iowa on Friday, February 9, 2018 at 1 p.m. with his nephew, Eric Lawrence officiating. Burial will follow in Pine Hill Cemetery. Visitation is Friday from 11 a.m. to 1 p.m. in the funeral home. In lieu of flowers, donations may be made to St. Jude Children’s Research Hospital, 262 Danny Thomas Pl, Memphis, TN 38105 / www.stjude.org

The family of William "Bill L Perdue created this Life Tributes page to make it easy to share your memories.

Send flowers to the Perdue family.