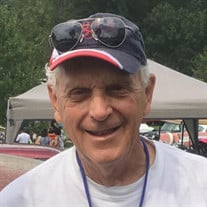 William “Bill” Umberger passed away Thursday, December 23, 2021, at the age of 85 at his home in Iowa, LA. He was born April 15, 1936, in Owaneco, IL to Thales and Lucille Umberger. He served his country in the U.S. Army in Korea. For over 30 years he was a machinist at Olin in East Alton, IL while residing in Edwardsville, IL. Truly a genuine “car guy;” he never trailered a car to a function – he always drove, and his tires were well worn. From his 1934 Ford coupe of his youth to driving across country in his 1937 Chevy truck pulling his handmade teardrop trailer to multiple visits to the Bonneville Salt Flats and of course his quick stops around Iowa! Clever and quick witted with a vast knowledge of many subjects, Bill always had time for a chat or a good joke. They truly broke the mold after him. Bill was a master in all his trades. He was an active member of the First United Methodist church in Iowa, LA and will be greatly missed by the “Codgers” and many others. His humor and generosity were an integral part of his everyday life. Left to cherish his memory are, his beloved wife of 63 years, AnnaBelle Frailey Umberger; his daughter Gena (Chris) Miller of Iowa, LA, his grandchildren Shelby (Derek) Rider of Shreveport, LA, Jake Miller and Justin Miller of Iowa, LA. Bill was preceded in death by his parents; son Russell (Rusty) Umberger of Edwardsville, IL; sister, Patricia (Pat) Umberger of San Francisco, CA, and brother James (Jim) Umberger of Taylorville, IL. In lieu of flowers, the family requests donations to the veteran’s organization of donor’s choice, St. Jude’s, or charity of choice. Thank you to Dr. Lewis, Barbara Laughlin, Nurse Theresa, and Eric Hardesty. Funeral services will be in Iowa First United Methodist Church on Thursday, December 30, 2021 at 1 p.m. with Rev. Dr. David DeWitt officiating. Cremation will follow the service under the direction of Johnson & Brown Funeral Home of Iowa. Visitation is Thursday in the church from 10 a.m. until the time of service at 1 p.m.

The family of William "Bill" Umberger created this Life Tributes page to make it easy to share your memories.

Send flowers to the Umberger family.