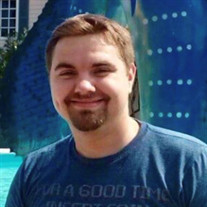 Wilson Lee Corbello of Lake Charles, born August 6, 1984, son of Gilbert Wayne Corbello and the late Deborah Miller Bailey, passed away Wednesday, January 6, 2021, at the age of 36. Lee, a graduate of LaGrange High, worked as a waiter for... View Obituary & Service Information

The family of Wilson Lee Corbello created this Life Tributes page to make it easy to share your memories.

Send flowers to the Corbello family.